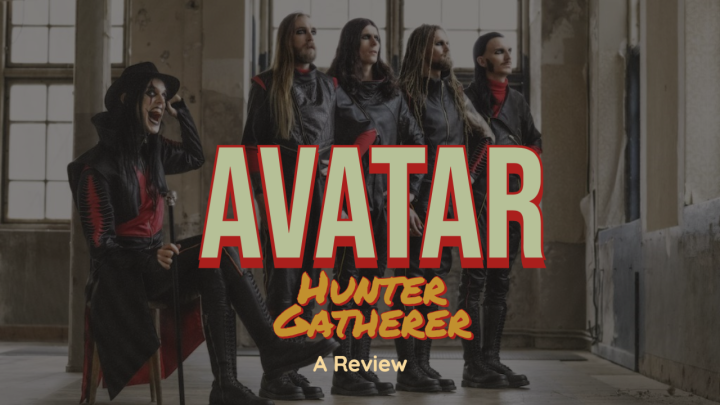 Glory to our King, Swedish melodic-death-metal band, AVATAR, has dropped their 8th studio album that just may take the crown of one of the strongest albums of 2020, if not the reigning title itself. The five Swedes paint themselves in their clown & jester costumes once again, but this time in a much more serious manner. The band has retired the King and has set sail far away from the land of Avatar Country, with a much heavier and dystopian record that is Hunter Gatherer (2020).

Back in early 2020, you know, back when things were still pretty normal, the band had forewarned fans that the lighthearted escapism that was built around Avatar Country (2018), where we all proudly displayed our citizenships to the fictitious land while hailing the, fictitious, King, would be buried away for Hunter Gatherer (2020).

And boy, they did not lie.

Right out of the gate, Hunter Gatherer (2020) comes for our “wigs” (as the kids would say) with the opening track, “Silence of the Age of Apes“, which is also the first single off the album. The first thing I noticed about this track is that this song is a drum-heavy belter that shines a much needed light on the talent of drummer John Alfredsson. Furthemore,  our introduction to Johannes Eckerström vocals in this album is an intense one. Not a second of clean, only hard hitting guttral metal screams that come for your throat (and I guess his).

What I enjoy most about this trac though, is how everything in the song feels as though it was built around Alfredsson’s playing, rather than the typical decision of the guitars or vocals. This gives an epic and cinematic feeling that opens the record, that also appropriately propels the listener to the brutality that is Hunter Gatherer (2020).

Whether this is your first listening experience of AVATAR or not, it won’t take you long to notice that the strongest characteristic of the band is that every single member plays a key component in the songs. There’s no member that outshines the other, and if one of them were to be missing in a song, you would notice.

Take the second track on this album as an example. Although the guitar playing in “Colossus” can come off as quite simple at first few listens, it’s still a force to be reckoned with. This is what I always find so brilliant in the way Tim Öhrström and Jonas Jarlsby work, and it is something very specific to AVATAR.  The two have the masterful ability to write heavy and melodic guitar parts that are so clean to listen to you think they’re simple until you see it played live.

The album then goes into “God of Sick Dreams”, which is the song that triggered an epiphany moment of what the album is truly about. It was at this point that I realized that I had to restart my listening experience and pay closer attention to the thematics from top to bottom.

This may not be a classic AVATAR concept album, but that doesn’t that the band has abandoned their incredible skill at writing in theme.

As mentioned previously, this album is not a lighthearted “here comes the clown” record that some AVATAR listeners may have gotten used to. It’s actually quite dark…and depressing, especially if you listen to it in the present day with everything going on.

Ironically, Hunter Gatherer (2020) was recorded long before the complete trainwreck that has become 2020, and these frightful dystopian subjects that were written fictitiously.. yet they do not fall far from today’s reality. More importantly, it adequately captures the honest fear and unsettlement one has when the world is falling apart.

Furthermore, I find it to be rather interesting that this record does not stick to a certain narrative or a point of view. For example, “God of Sick Dreams” tells the story of an abhorrent creature that is destroying the world as we know it. Then there are the tracks “Scream Until You Wake”, “Child”, “Justice” and “Gun” that are more from the perspective of a victim of these apocalyptic catastrophes.

I guess that’s why it’s wildly beneficial to not label a record as a “concept album” because then you have the creative freedom to bounce from story to story, without worrying about giving each one a satisfying ending. But even though Hunter Gatherer (2020) has multiple different storylines sprinkled throughout, it still manages to have an overarching theme that makes you go “Ah, okay the world is falling apart and we hate it here”.

It’s also worth noting the balance of emotions that can be derived from this album.  Hunter Gatherer (2020) is a beautifully composed album due to the always incredible mixing and production of Jay Ruston, and thanks to his great work, the album takes you down this pathway of a whirlwind of feelings… that you may have not expected (I definitely didn’t).

At first, you’re seduced by these angry instrumentals that make you feel like you’re being surrounded by a pack of animals, and you have to prepare to fight for your life. Then the album gets to “Scream Until You Wake” and the emotions shift, ‘ though sound is still epic and big, you’re hit with a wall of sadness.

The crazy thing is that the vitality of this record never changes, yet the emotions do. Every song is beautifully embellished with the thick bass lines of Henrik Sandelin, the robust drums of John Alfredsson (that I honestly believe stole the show on this album),  the always spectacular riffs by Tim Öhrström and Jonas Jarlsby, and obviously Johannes Eckerström‘s outstanding vocals, but the energy shifts enough for you to realize that the tone is different. Then you listen to the lyrics and you’re like “See! I’m right!”

You may not even realize it until your second run-through, but how the hell does the album go from:

“A little child stood by the grave, and was told that it was brave // it’s not right to lose one’s mother while so young // The child was wondering still if mother was so ill then who pulled on the string so the bell rung // she’s buried alive”

The album unravels into a sort of reality check, for both the band and the listeners, of how that, maybe, this ‘dystopian’ world they’re singing about may not be so dystopian after all. Songs like “Justice” and “Gun” (the tracks that follow Child”) discuss the reality of what we call in Criminology the “Labelling Theory” — which is when you label someone as a ‘deadbeat’ (for example) from a young age and they fall into that lifestyle because they feel like it’s their destiny.

Furthermore, these songs pick apart the brutal reality of savage times, you know the Hunter-Gatherer days when it was you either put your fists up and fight to the death or have your ass kicked…and die.

It almost makes me sad to say that such a depressing and scary themed album beautifully represents the true barbaric era we are living in. Whether we’re fighting off a viral pandemic, fascist leaders, death, racism, etc…You are forced to either to not only brave it, but fight for your life, or have your life taken.

Overall, Hunter Gatherer (2020) did not disappoint. It’s heavy, without being repetitive. A lot of interesting creative decisions were made on this album that truly highlighted the vast spectrum of the band’s talent, such as using a poplike-chorus of “Scream Until You Awake”, and putting the extreme death metal track of “When All But Force Has Failed” after a ballad. I mean, come on, this album also has an interesting feature from the man himself, Mr. Corey Taylor… What more do you need?

This is definitely one of my most favourite albums of 2020.

Until next time Interwebs! 🕸

Thank you for reading Interwebs, all your support means the world to me. I just wanted to add that I recently lost my source of financial stability and could use any help. If you enjoy my writing and have $3 to spare, please consider tipping me on ko-fi