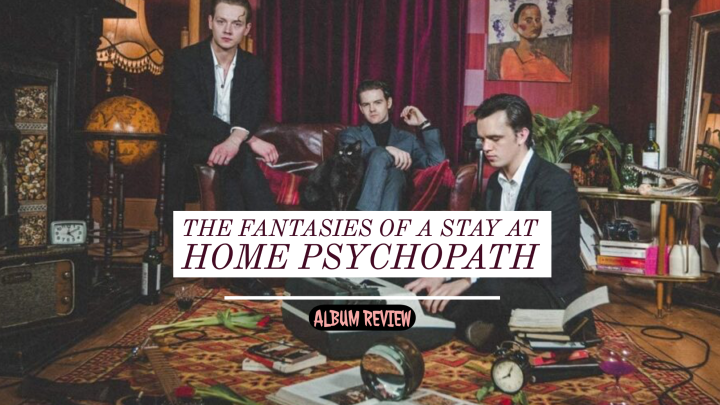 Today will be marked on calendars as a bustling day of new music from every genre on the board, but the group that stole the show is [not surprisingly] the 3 Brits, Matthew Neale (drummer); Charlie McGough (bass player); Thomas Haywood ( guitar & lead vocals) that go by the band name of The Blinders.

The Fantasies of A Stay At Home Psychopath (2020) produced by Rob Ellis (PJ Harvey, Anna Calvi) and mixed by Adrian Bushby (Foo Fighters, Muse) is the group’s sophomore record. It follows the critically acclaimed debut album, Columbia (2018), which I, myself, have raved about excessively about on here.

This album was one of my most anticipated releases of 2020, after learning of The Blinders existence only a mere few months ago. Columbia (2018) was everything modern alternative rock needed, it unapologetically took on deep-seated topics such as existential dread, mental health, and the overall disarray of the current state of the timeline we are living in.

Despite immediately falling in love with the band and their music, I was genuinely curious about how the three-piece would top such a fantastic record. As a new listener, I wanted more intelligently expressed politically driven tunes, more youthful brash energy that is packed in each track, but I didn’t want an album that could sound like B-Side of their debut album.

Shame on me for doubting the crafting abilities of Haywood, McGough and Neale.

To no one’s surprise, The Fantasies of A Stay At Home Psychopath (2020) is a collection of powerful tracks that exudes the confident abrasive energy of their punk predecessors but is meticulously balanced out with bluesy Nick Cave-inspired darkness.

One of the most notable characteristics of The Blinders is their impenitent approach to things that genuinely upset them. It’s without question that is the thing that gave this group a stellar kickstart to their career a few years ago. Columbia (2018) was angry, loud, and in your face. Therefore, many of us expected the same general vibe in The Fantasies of A Stay At Home Psychopath (2020), however, that’s not what we’re given…necessarily.

Although the album still draws on similar topics, they approach these highly-sensitive narratives with completely different angles from their last record. It still has it’s venomous punches at right-wing governments, it has its active need/want of reform and call-for-arms energy, but it’s a more of a ‘tasteful’ take on these thematics that makes you think more.

Instead of more punk-inspired guitar riffs, the band’s sophomore album draws on a lot more of the bluesy-guitar elements, making this album feel more “grown” (as the kids say). It shows that the band has learned that you can win your battle by outsmarting your opponent, as opposed to grabbing whoever is listening by the throat.

[I’m a fan of both options to be fair though]

One of my favourite tracks on this album is the opener, “Something Wicked This Way Comes”. My mind immediately went to Peaky Blinders, as it’s the right combination of threatening, intense, and suave. This song cleverly introduces your mind to this imagery of expensive suits and clean-shaven appearances, but will still cut your throat out if needed.

Which I think is the best way to describe this entire record.

Furthermore, this album, for the most part, is an abundance of witty odes woven between luscious dark rock and roll tracks. Unlike their first record, these songs are not as straight-forward in terms of meaning. Haywood’s writing in this record applies a lot of the characteristics of Jim Morrison, Nick Cave and even Bob Dylan, rather than brash-punk writing styles that we heard in Columbia (2018).

Instead, The Fantasies of A Stay At Home Psychopath (2020) is riddled with deep poetry that makes this album feel a lot more personal than it’s the forerunner. The loose analogies and similes give the listener an opportunity to create their own imagery and understanding of the songs, while Haywood and the band have their own understandings for them.

Sometimes the most effective writing technique is to be a bit of a tease with your message. It lets people run many different ways with a song. However, with that being said, it wouldn’t be an album by The Blinders if there wasn’t at least one blunt and controversial track. Similar to the notorious “I Can’t Breathe Blues” on Columbia (2018), this album has “Lunatic (With a Loaded Gun)”.

The title itself makes you go “oh alright”, but the song immediately opens with:

Those lines alone should allow you to understand what I mean, even if you are not familiar with the band.

Those that are familiar with the band though, may feel as though “Lunatic (With a Loaded Gun)” is like a node to Columbia (2018), as well as to the group themselves. It’s a lot less “peaky blinders” and a lot more three lads from Doncaster, UK. It’s still quick-witted and gets you to quirk your eyebrows, yet it’s drenched with that punk-energy that we came to know and love in their debut album.

Overall, The Fantasies of A Stay At Home Psychopath (2020) is pure class. The songs are sexy, witty and sophisticated, all the while still having punchy guitars that allow you to remember the ferocity of the group.

Favourite Tracks: Something Wicked This Way Comes, Rage At The Dying Light, Black Glass, Mule Track & In This Decade

Until next time Interwebs! 🕸

Thank you for reading Interwebs, all your support means the world to me. I just wanted to add that I recently lost my source of financial stability and could use any help. If you enjoy my writing and have $3 to spare, please consider tipping me on ko-fi

One thought on “The Fantasies of A Stay At Home Psychopath: Sophomore Album by The Blinders (A Review)”